Is Your Site Secure?

This August will be the two year anniversary of Google announcing that it was going to start using a website’s security as a ranking signal. Some agencies acted promptly, some agencies did not act at all. In the end, it is clear that having an SSL (Secure Sockets Layer) Certificate installed on your hosting account is clearly going to benefit your online presence in more ways than one.

Many industry experts watched intently for weeks after the initial roll out and compared the data from the weeks before. The initial results were minimal only affecting 3-5% of searches. So when secure first page results went from 7% to 8%, not many took the notion of being secure very seriously.

This data comes from Dr. Peter J Meyers of Advanced SEO. The increase in secure first page rankings has been steady.  This indicates that no single Google update caused a spike in secure rankings.  Understanding that Dr. Meyers data is based on a mere 10,000 keywords other studies must give similar results in order to validate his findings.  Recently his data was publicly acknowledged as correct when he presented at the SMX Advanced  conference last month. Both Glenn Gabe (@glenngabe) and Gary IIlyes (@methode) of Google took to twitter and without giving any specific number they did confirm that he was indeed in the ballpark.

Now, what does this really mean? Since the incline has been steady that indicates that no one algorithm update is giving any significant ranking boost to secure sites BUT this data is a clear indication of where the industry is going and what your competition is doing online. Companies are getting serious about online marketing. Those who are working with agencies such as Hawk are pushing the limits and making sure that they have every edge up possible when it comes to organic rankings.

There are many positives that come with a secure site:

In conclusion, over the next 16 months experts are predicting that 60% of first page results will be secure. Why wouldn’t you 100% secure your site as fast as you can? All of Hawk ’s clients are secure or are being secured. We recommend that you take action to secure your site with an SSL Certificate. 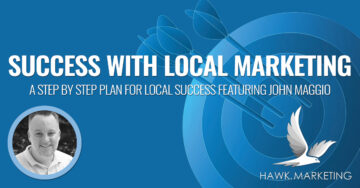